A BRIEF HISTORY OF PASTEL

A view of the last 250 years in the Pastel Medium

“What other medium can claim such as succulence of pure colour? What other medium can provide such textural excitement? What other medium can take the student artist from drawing to painting with such ease and demonstrates so successfully that the process of painting is in fact – still – drawing? In many respects the art of the cavemen was a form of pastel. Many of the rich ochres and earth tones coming directly from the soil. The history of pastel is as fascinating as the medium itself, which emerged as a major medium in the 17th century. I embarked on my own search for the roots of the medium at Lancaster University in 1990. At that time I was told I was using resources from the British Library amongst other which had never been accessed in over 100 years. It was a unique research. My slide library of this rarely seen history includes images from these British Library archives. It is a shame that the word ‘pastel’ has been highjacked in the past to mean ‘pale’. It is a term often used in the fashion accessory industry amongst others.   Yet as a trawl through the history of the medium will testify – bold brilliance is the norm, not pale and pasty, and not a great deal of pastel work was completed in an ultra-high tonal key, outside the 17th century.

Pastel is made up from the same high grade pigments that the best oils and watercolour paint is made. It is at least as permanent as other mediums.Pastel work held in museums and galleries worldwide are testament to the fact that pastels do not fade and do not deteroriate in over time. They require less (if any) restoration that oils and watercolours. Pastels from the 17th century are as fresh and clean and unsullied as the day they were painted. My university study was framed around the idea that someone – somewhere inEurope invented’ or formulated the first set of commercially available pastels. By ‘commercially’ available I mean available and already made into sets for artists. German alchemist and occasional painter Johaim Thiele is widely regarded as the first to put together a set of colours bound with china clay and binders. And yet his role was relatively insignificant compared to the major artists of the day who ‘developed’ the medium into a major medium. My research concentrated on these artists – the ‘fathers’ and in this case ‘mother’ of the medium.” 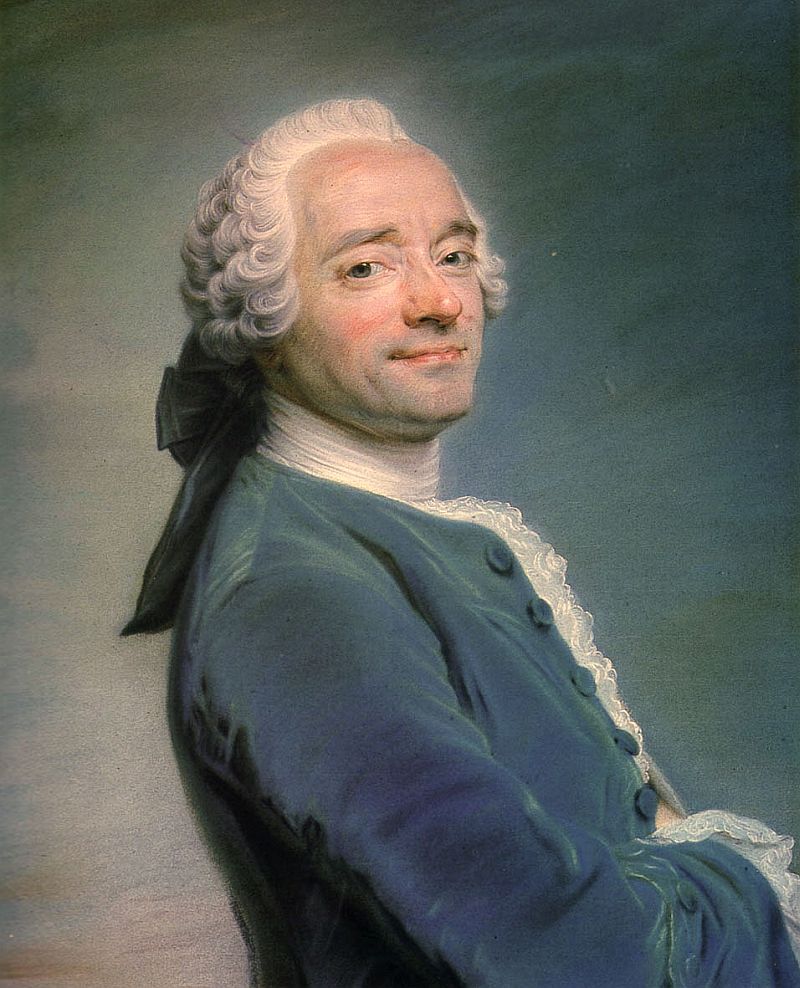 The rise of pastel as a major medium also heralds the development of the portable portrait – until pastel – portraiture was mainly large and of course, in oils. Pastel was not only quicker and cheaper than oils it was also ‘fashionable’. Maurice Quentin de La Tour became so popular that the French Academy eventually (for a period of two years)- banned the pastel medium from its exhibitions. It was too popular – too quick to produce and subsequently cheaper than oil. Popular demand bought about its re-emergence into the academy exhibitions. The crown prince of Austria – a great pastel enthusiast – put up a prize for the best pastel ‘fixative’ –(yes even then ‘how to fix pastels’ was an issue). The perfect recipe for fixative – so legend has it- died with La Tour! Some of those recipes make fascinating reading. One of La Tours recipes was based on Casein – a why product – which is now being considered an excellent fixative for pastels.

THE AGE OF ROSALBA

Venetian artist Rosalba Carriera ( whose diaries I have translated) was the first major force in pastel’s development. Many of her pastels were especially made for her by her colourman in Naples, who experimented using sea shells ground to a fine powder as a carrier for the pure pigment. When Rosalba first took her fabulous collection of pastels to Paris, history was made. As a fabulous atist and a very caring and giving tutor (her teaching often given freely) she became a major influence on the French art scene. She and her new found ‘fans’ were said to have ‘set Paris alight’. Maurice Quentin de la Tour,Watteau, Perroneau; and great Rococco artists all studied with her at some point.

Everyone wanted a portrait by Rosalba when embarking on their ‘grand tour’ of Europe and many of these portraits are to be seen in country estates Britain today. 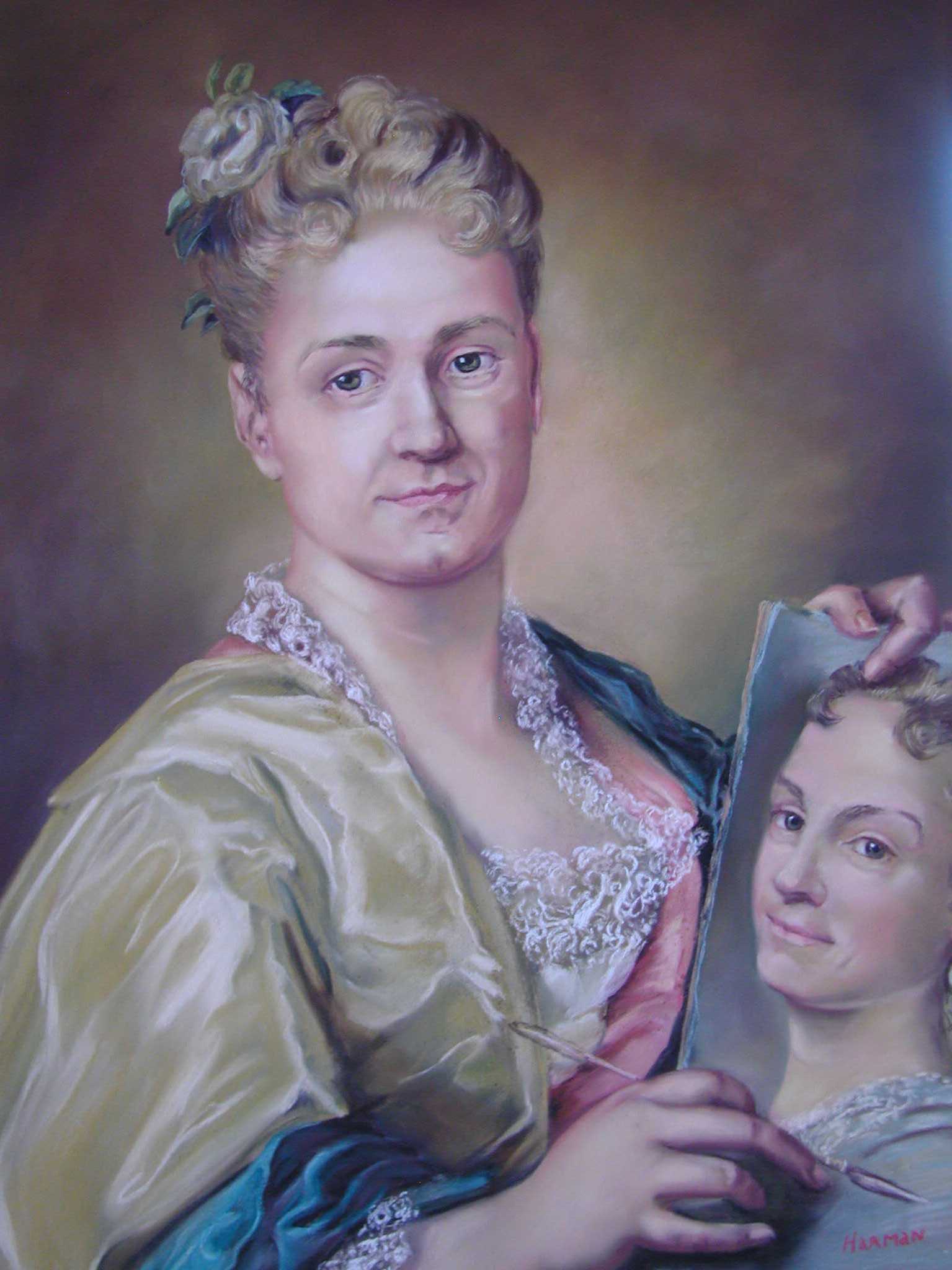 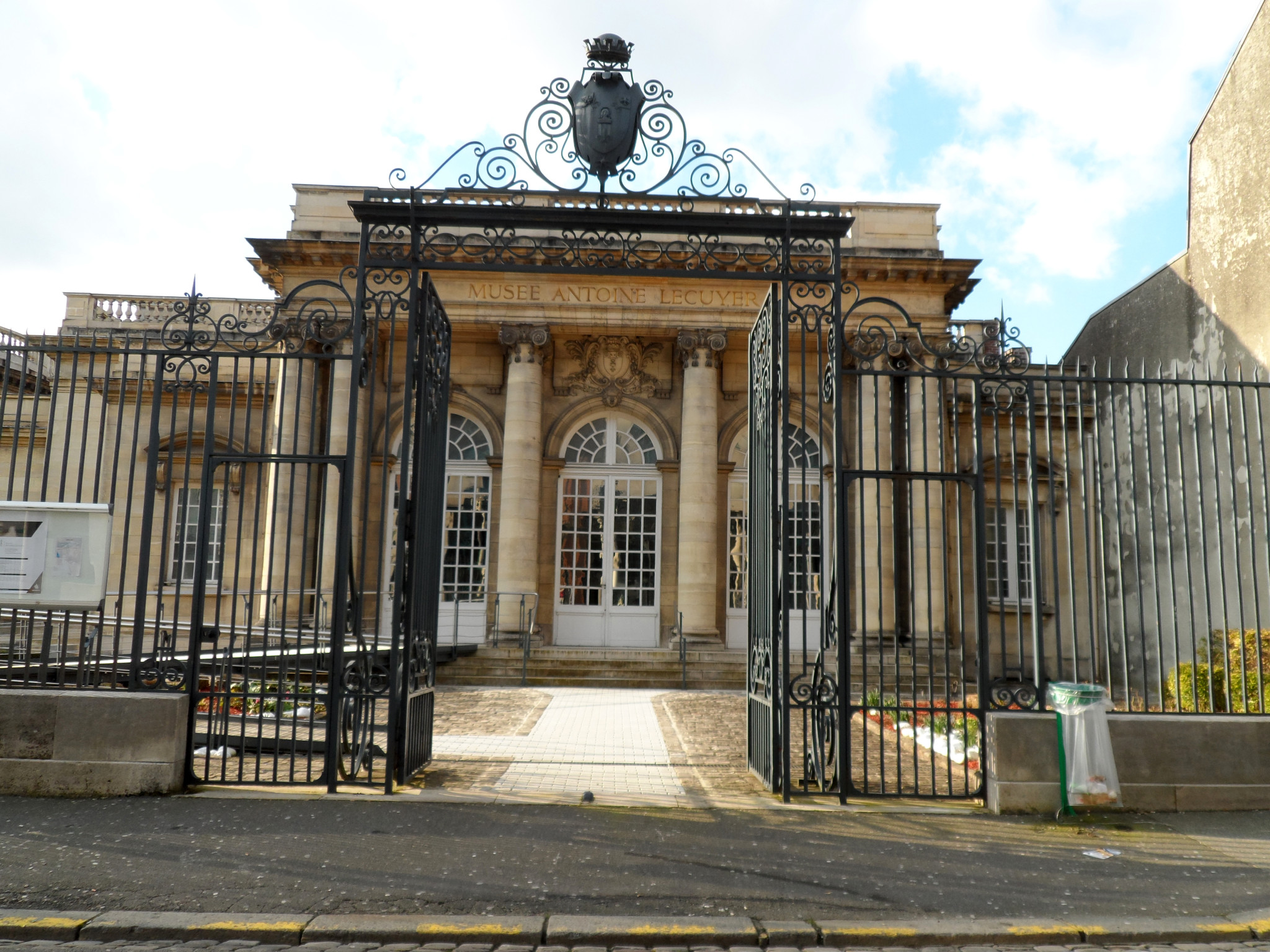 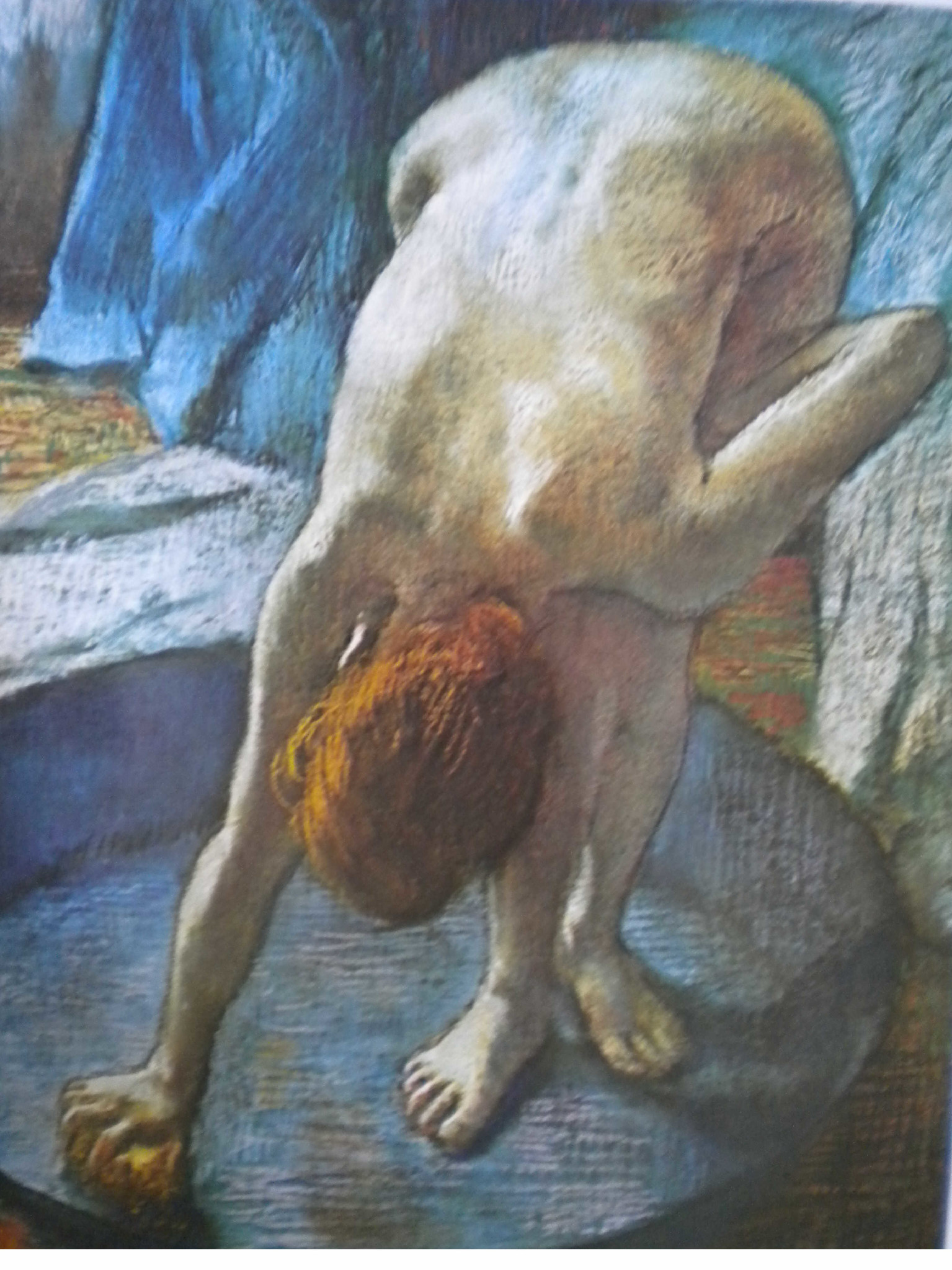 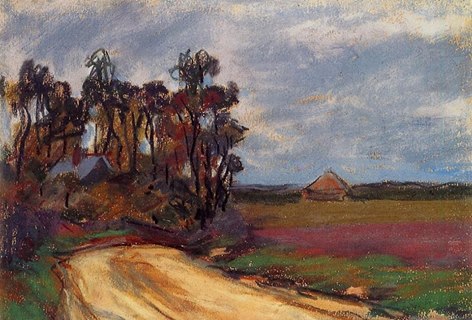 One of Monet’s many pastel studies

The luminous dry medium with the eventful and fascinating history is back claiming its place in the world of fine art. It is when all is said and done the oldest medium in the world and the most permanent.

In the height of the first heyday of the pastel medium, the 18th century, portraiture was the subject – landscapes were very rare. Moving on 100 years Degas became a major pastellist – his experimentation in the medium being legendary. (see below left – Degas’s Dancers 1873) In the mid 19th century other artists were experimenting with pastel , including quite a few pieces by Monet (see below right – View over the Siene Estuary 1864)

In the mid 20th century pastel re-emerged – largely lead by the USA and alongside some long awaited developments in the pastel product. Manufacturers developed surfaces and pastels which at long last gave the pastellist choices. The new wave of interest in pastel followed. The International Association of Pastel Societies (IAPS) was formed – representing pastel societies worldwide, and hosting a biennial convention in Mexico.

In their own quiet way British pastellists were at work throughout the second half of the 20th century. The British pastel society is now 100 years old. The French Society des Pastellistes is of an equal age. But it is the USA that actively raised the profile of the medium, with the inception of the American Pastel Society in the early 1970’s. The American pastel scene is still strong today and there are almost as many U.S. pastel societies as there are states. Both Canada and Australia now boast very healthy societies.

Looking back towards Europe, Britain and France had the strongest tradition in the medium. In Britain during the 1980’s pastel experts were sought to teach in the major adult educational residential colleges. Christopher Assheton Stones (now deceased), Margaret Evans (Scotland), Jackie Simmonds, Barry Watkin and Aubrey Phillips – (Southern England) (myself in Northern England), to name but a few. Between us we were responsible over a period of 20/30 years or so, for thousands of new pastellists. Many – myself included, take our role as mentor very seriously. In France – a similar pattern of ‘mentors’ evolved. France has always boasted far more pastel societies which have offered more exhibition opportunities – and have a reputation for being extremely selective in their membership.

In 2011 the Spanish Pastel Society hosted a major exhibition. The society (ASPAS) hosted the first International Pastel Biennial at Oviedo University, which featured work from 17 nations, including Russia, Poland, Italy, Malta, Lithuania, The USA, Canada, Japan, The UK, and more. The next ASPAS – International Biennial will be around October 2013 in Oviedo.

So what is the great fascination of Pastel?

Without doubt for me the immediacy and the brilliance of pastel is my medium of choice for light filled landscapes, but is there any scientific basis in this belief? In fact yes:

.this effect, is a characteristic of all powders, is produced by the innumerable irregular particles of pastel,

each of which reflects light diffusely…….Described by Sir Isaac Newton in his widely read Opticks of 1704,

as far brighter that the light emitted from most any other surface, scattered light confers on pastel an unmistakable matte, velvet like quality, a unique immediately recognizable sense of white light.”

So it is official. Because pastel is a dry medium – a powder – it is able to capture light more than wet paint. It is pure pigment in a binder and as a result it has a number of qualities difficult to achieve in any other medium. The quality of the colour is intense and pure with few, if any additives. Add to that the speed of the medium when used – it is instant, direct application. Nothing interferes with the movement of the artists hand. Pastel doesn’t need drying time, so it is ideal for plein air painting – and chasing that all important light.” 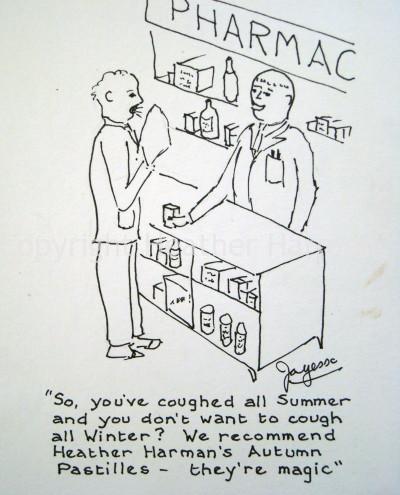